As a 16 year old, Clive Jackson left his home in England to work his passage scrubbing decks on a cargo freighter between Holland and Canada to visit Expo 67 in Montreal. He had just $50 in his wallet and no credit cards but it was a life-defining trip.

And it was the beginning of a lifetime of adventure for Jackson. Within a few years he had travelled all over the USA and Canada by Greyhound bus. He took 15 friends on a month long tour of the USSR flying on Aeroflot between Moscow and St. Petersburg and to more exotic places like Samarkand and Tashkent as well as the Pamir Mountains in Tajikistan. Clive Jackson also travelled on the Orient Express from Paris to Istanbul and back in 1974. 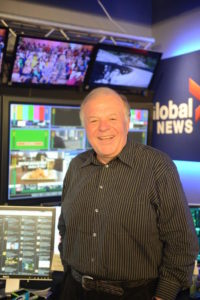 Jackson spent 50 years in journalism before retiring in 2015 at the age of 65, when he set up his own media consulting company, Headline Strategies. He has reported from every continent in the world.

He left the Daily Mail in London to work out of Los Angeles, California, in 1976 and spent a summer camping in Alaska in 1977,  hitching rides on small planes and boats along the Inside Passage before settling in Vancouver, Canada.

He married Carol-Ann the following year and since then the two of them have visited over 100 countries of the 193 countries officially recognized by the United Nations. They have also visited another 25 or so states and territories.

Their journeys have taken them to every continent, including Antartica and the Arctic. On their honeymoon they spent three months travelling through South America – where Clive was held briefly under house arrest in Asuncion, Paraguay – and many parts of Africa, which they have subsequently visited six times. Their passion is wildlife and they have photographed elephants, cheetahs, leopards, hippos, rhinos, gorillas and chimpanzees in Africa, massive tortoises, 250-pound turtles, and huge iguanas in the Galapagos and tigers in India.

There have visited Everest, Nepal, Mount McKinley in Alaska, Angel Falls in Venezuela, Victoria Falls in Zamibia, Ayers Rock, Australia, and Iguazu Falls in Argentina,Namib desert in Namibia; Milford Sound in New Zealand, along with Machu Picchu, Peru; Pyramids of Gisa, Egypt; Angkor Wat, Cambodia; Petra, Jordan; the Mayan ruins in Tikal, Guatemala, Ephesus in Turkey, the statues of Easter Island, the Taj Mahal in Agra, India, and most of the iconic buildings and ruins of Europe.

They have driven to Alaska twice with their son, Simon, and travelled extensively throughout the great national parks of North America from Yellowstone to Yosemite to the Grand Canyon. The Jacksons have explored virtually every region of the earth and visited most major cities. What you see here are photographs taken from their trips: many were originally slides. All are available for purchase.